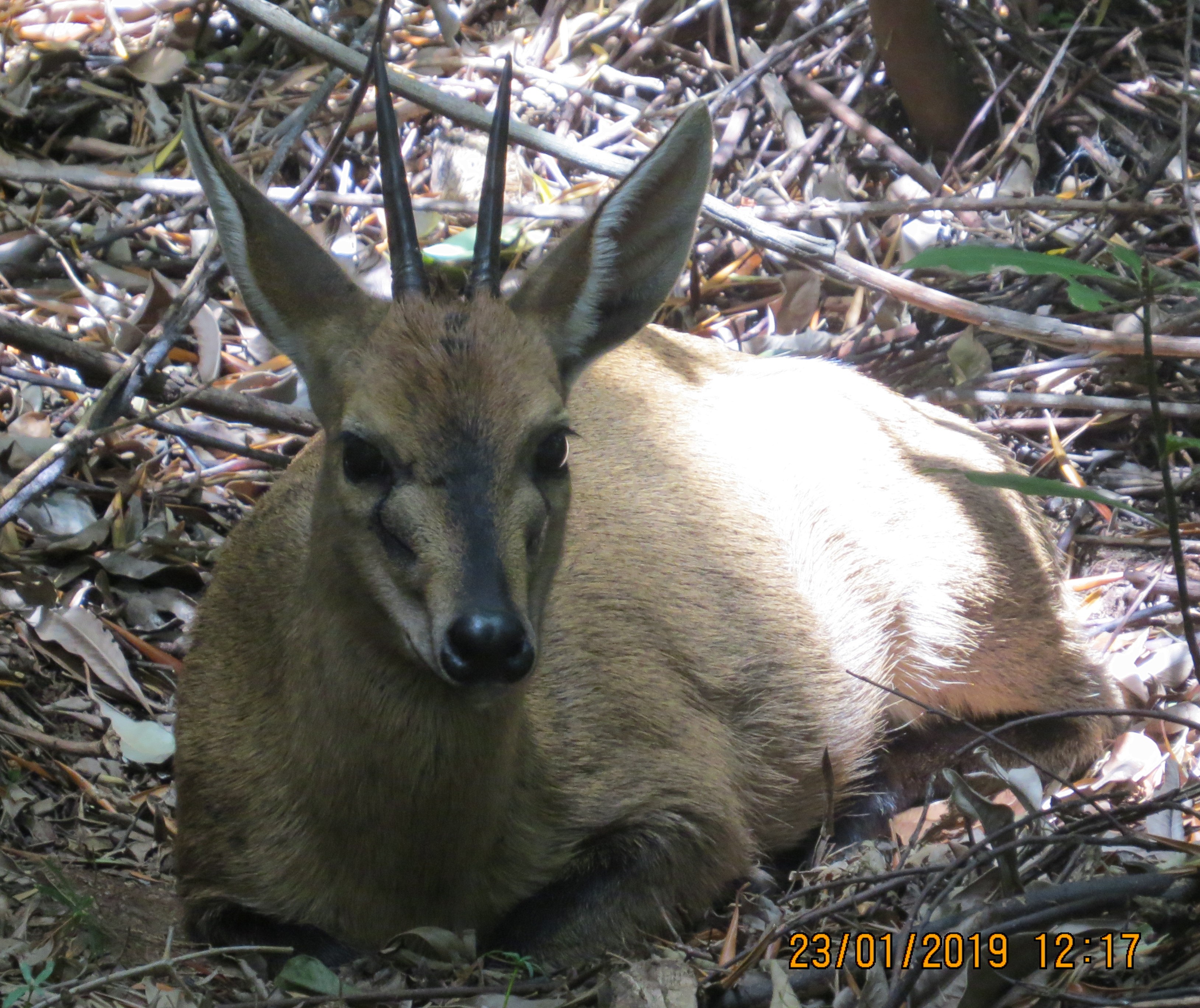 Common Name: Common Duiker
Family: Bovidae
Description: A small antelope with horns (11cm) only occurring on the males. There are as many as 19 sub-species and their colour depends on where they are found; chestnut colour in forested areas, grizzled grey in northern savannahs and light brown in arid regions. Duiker generally grow to about 50 cm in height weighing about 12 to 25 kg, females tend to be larger and heavier than males.
Distribution: Wide range across Africa, south of the Sahara. Habitats preferred with sufficient vegetation cover within savannah and hilly areas including the fringes of human settlements. Since the removal of the internal fences, this antelope’s distribution now extends higher up the slopes of the mountain.
Diet: Browse a variety of plants but will also eat insects, fruit, seeds, pods, bark and fungi. As long as they have vegetation to eat (from which they get some water), they can go without drinking for very long periods.
Behaviour: Breeding is year round and females give birth to one fawn after a gestation period between 3 to 7 months. Males are territorial and smear gland secretions on rocks and branches to mark their territories.
Conservation Status: Least Concern
Interesting Fact: The Helderberg Nature Reserve has two Duiker, Rusk and Fritter, who were hand raised in the reserve after being abandoned by their parents. Both can still be spotted in the lower regions of the reserve as well as along night walks. 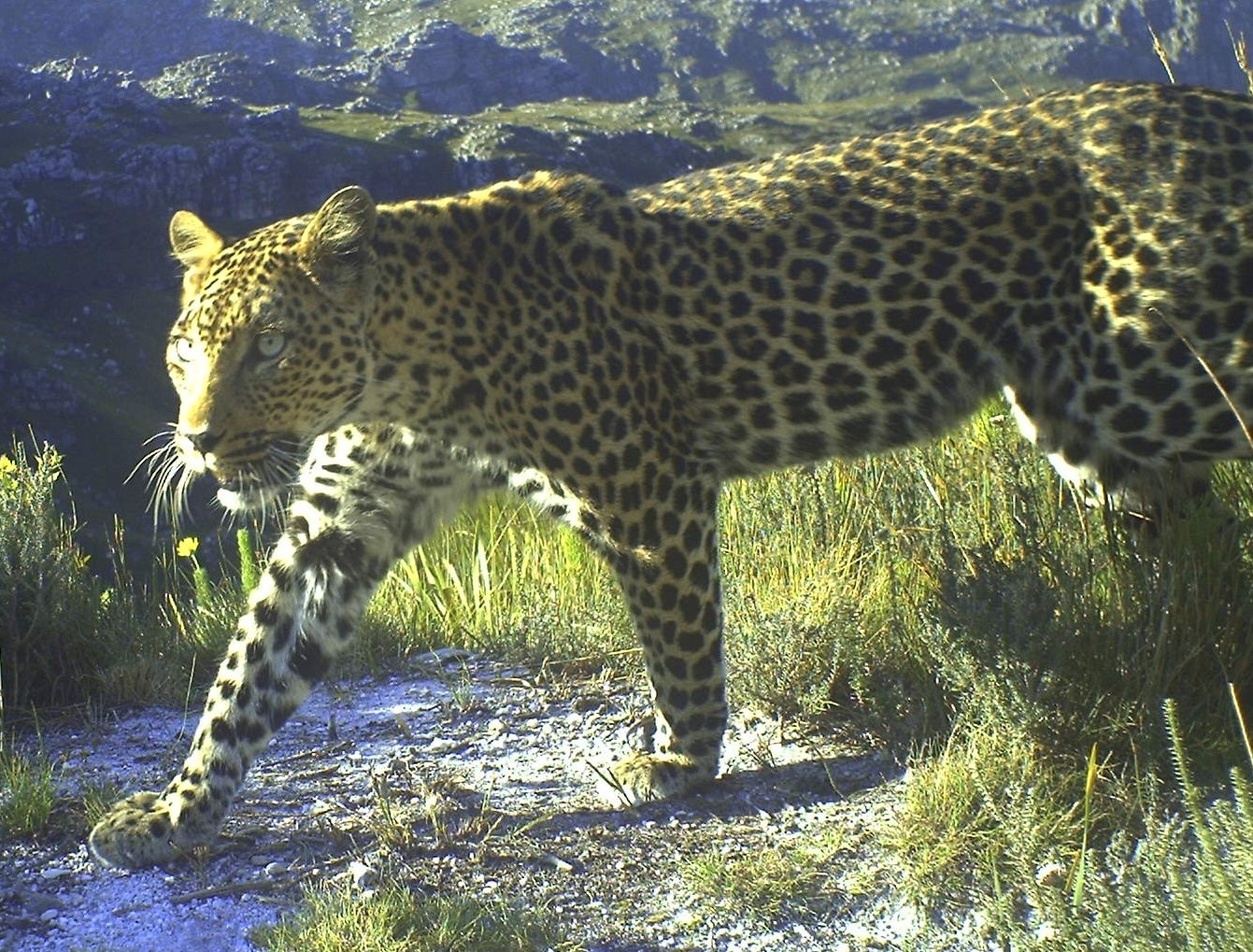 Common Name: Leopard
Family: Felidae
Description: Smaller than other leopards found elsewhere in Africa, the Cape Leopard averages between 20-35 kg. It is not a separate species; its smaller size is due to smaller prey species it consumes.  Coat colour varies from pale yellow to deep gold or tawny, and sometimes black, and is patterned with black rosettes while the head, lower limbs and belly are spotted with solid black.
Distribution: Having a much larger home range than leopards in other parts of the country, the Cape Leopard can cover areas between 200 – 1000km². Found in surrounding mountain regions in the Western Cape.  They are fairly common within the Helderberg Nature Reserve.
Diet: Porcupine, Dassies (rock hyrax), rabbits and small antelope like Klipspringer.
Behaviour: These leopards are solitary animals and only come in contact with others for breeding or defending territory.
Conservation Status: Vulnerable
Interesting Fact: Habitat loss due to development, as well as direct persecution by people trying to protect their livestock are the two most common threats to Cape leopards, however due to their small size and elusive nature, Cape leopards are not considered to be a danger to people. 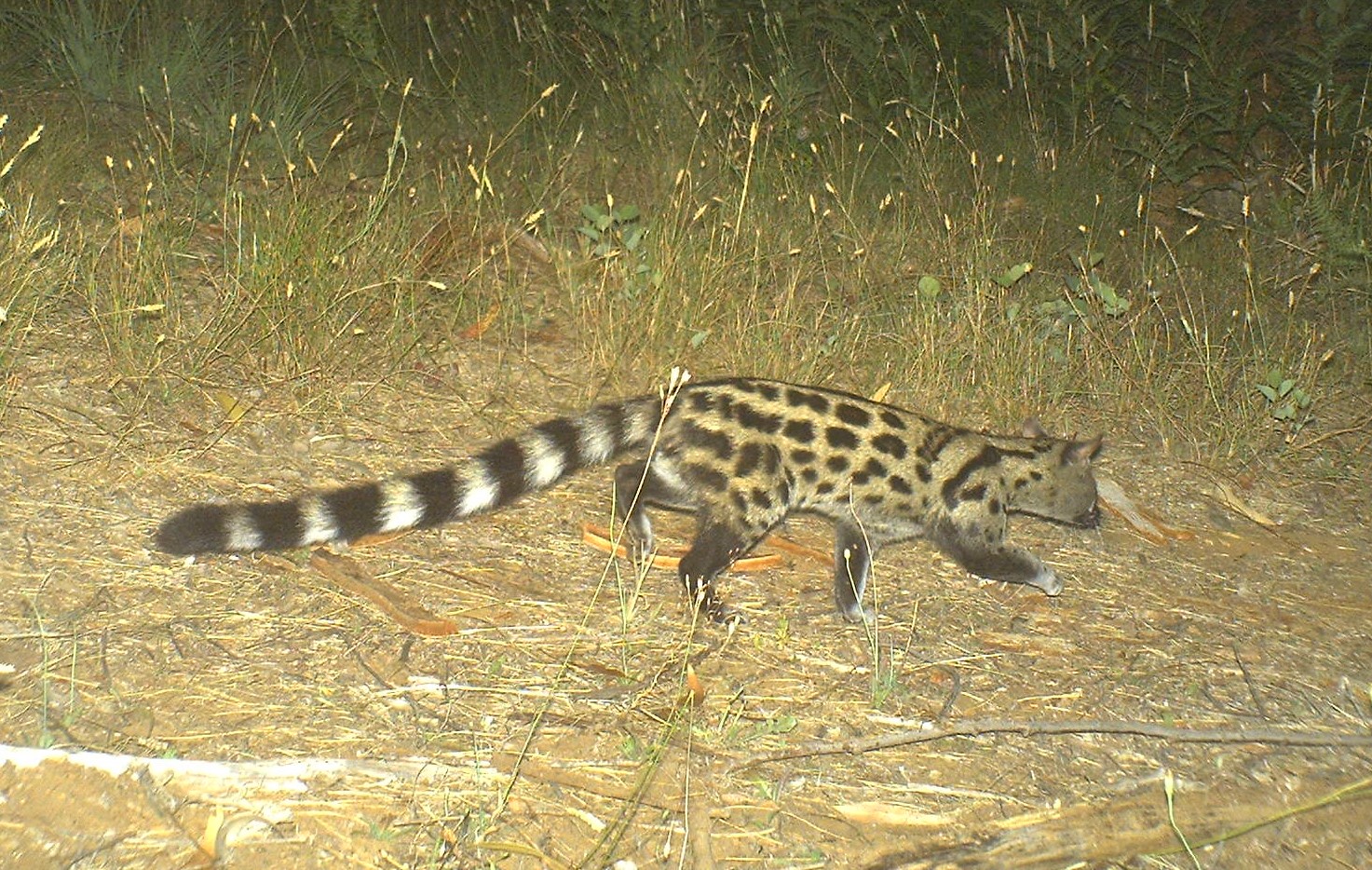 Common Name: Small Spotted Genet
Family: Viverridae
Description: Slender, cat-like body with a small head, pointed muzzle and large oval ears. The genet grows to about 43 – 55cm with a tail measuring 33 – 52 cm. its fur is dense with a pale grey coat that has numerous black markings.
Distribution: Woodland and scrub along rivers and is quite common throughout Africa. The small spotted genet is very common in the Nature Reserve and is often seen late in the evenings on the lawns of the picnic site.
Diet: Small mammals, lizards, birds, eggs, amphibians, centipedes, millipedes, scorpions, insects and fruit.
Behaviour: Adults are nocturnal and crepuscular, resting during the day in hollow trees or among thick vegetation. Breeding season occurs between January and September and a litter of four is usually born after a gestation period of 11 weeks.
Conservation Status: Least concern
Interesting Fact: Genets are solitary and males and females both scent mark their own territories. 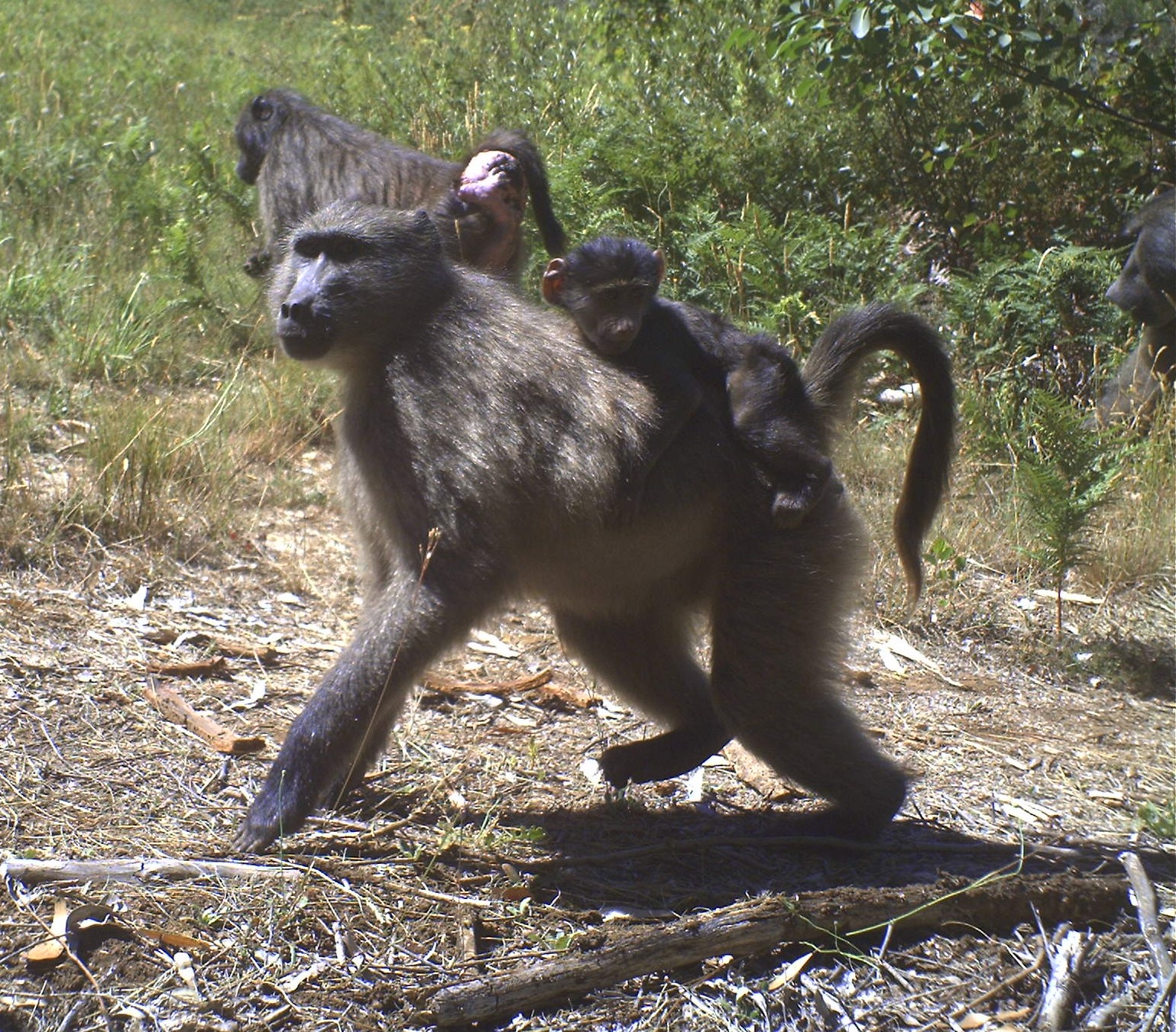 Common Name: Chacma Baboon
Family: Cercopithecidae
Description: The most distinctive feature is the long downward-sloping face and canines that are about 3cm in length. Males weigh between 21-44 kg while females weigh between 12-25 kg. This baboon is dark brown to grey in colour with a patch of rough hair on the nape of the neck.
Distribution: Live in an array of habitats throughout Southern Africa including, woodland, savanna, grassy slopes and desert. These baboons are often seen along the Watsonia Trail and around the Dome and West Peak.
Diet: Omnivorous with a preference for fruits, insects, seeds, grass, small mammals and fungi. Baboons in the Nature Reserve will break off protea flower heads and eat the seeds inside them.
Behaviour: Chacma baboon has a wide variety of social behaviours, including a dominance hierarchy, collective foraging, adoption of young by females, and friendship pairings. These behaviours form parts of a complex evolutionary ecology.
Conservation Status: Least concern 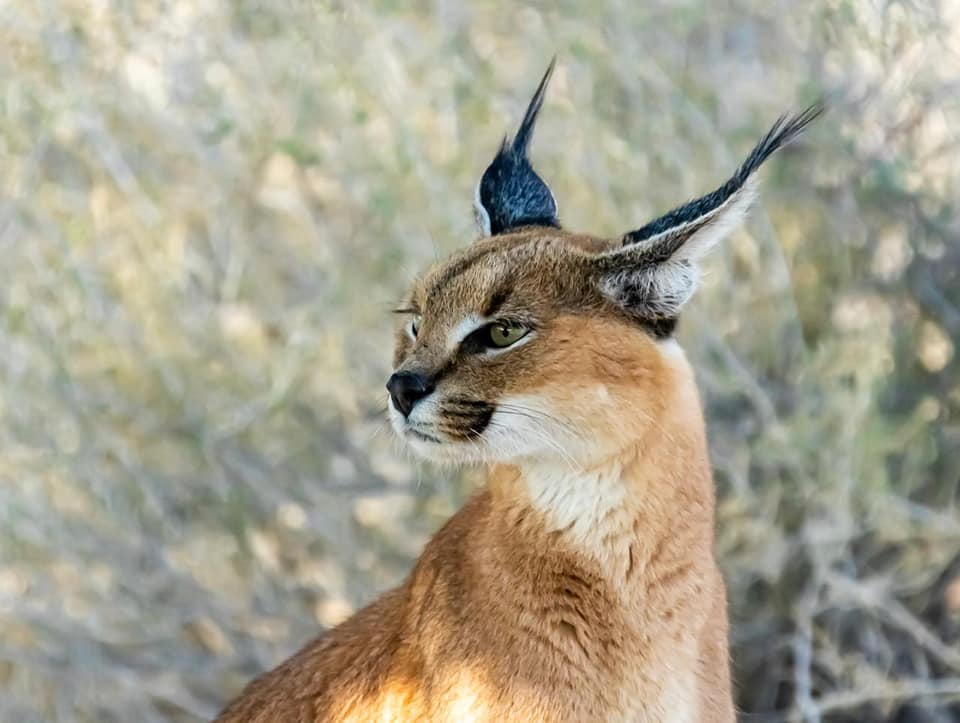 Common Name: Caracal
Family: Felidae
Description: The Caracal is a medium-sized wild cat that is about one metre long. Its most distinctive feature is the long black tufts on the back of the ear which grow to an average length of 5 cm. Its fur is short and dense and comes in a range of colours from tawny-brown to brick red. Caracals have white fur on their tummy, chin and throat and also have a short tail. Males weigh up to 18 kg and females up to 16 kg. They are both about 40 to 50 cm tall at the shoulder.
Distribution: They inhabit woodlands, savannah, semi-desert and scrub forests throughout Africa and also other arid habitats with low rainfall and some coverage.
Diet: Like most carnivorous cats, they have a broad diet but mainly prey on small mammals like rodents, hares and hyraxes as well as birds but can also eat larger animals like antelope. Caracal are nocturnal so most hunting occurs at night. They generally hunt on the ground but they can also climb trees and swim to catch prey.
Behaviour: Their speed and agility make them excellent hunters and their powerful hind legs allow them to jump more than three metres in the air.  They breed throughout the year and females will have from one to six kittens per litter. Gestation in approximately two and a half months and kittens are weaned by 10 weeks but will remain with their mother for up to a year. Other than staying with their mother for a year, they are mainly solitary animals and reach sexual maturity between 12 and 16 months.
Conservation Status: Least concern but it is illegal to hunt and kill this wild cat.
Interesting Fact: Caracals are religiously significant to the ancient Egyptians and can be seen in wall paintings as well as sculptures guarding tombs. Indian royalty also trained these cats to hunt game and small birds and were considered exotic pets. 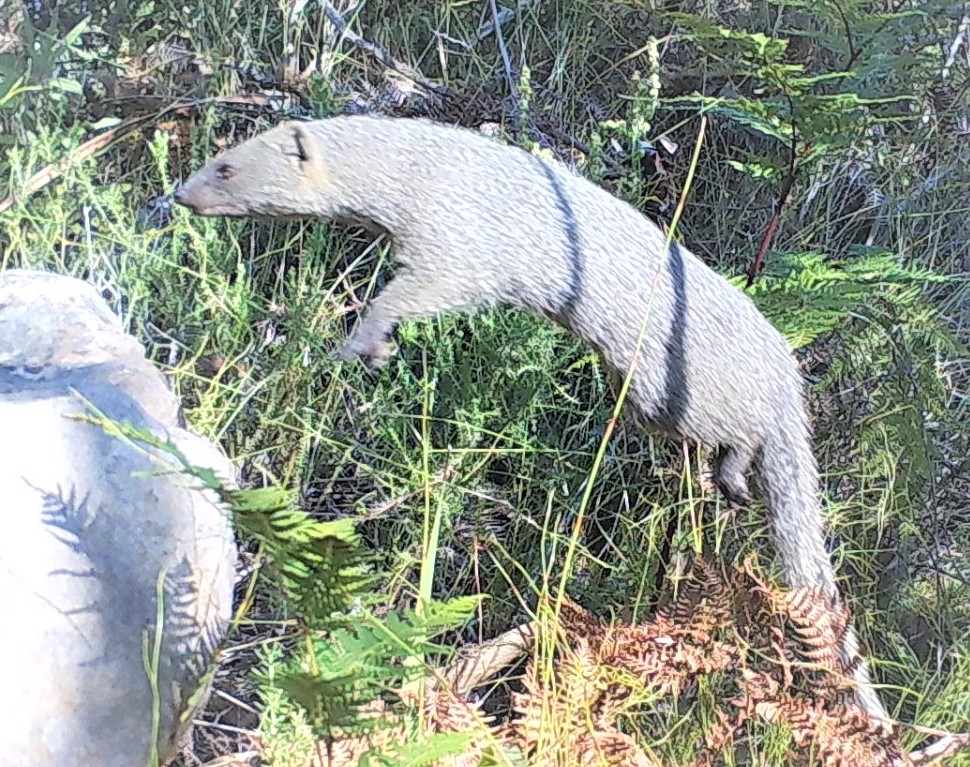 Common Name: Cape Grey Mongoose
Family: Felidae
Description: They have a body length ranging from 48 – 69 cm and a tail length of 20 – 54 cm and weigh between 1 and 4 kg. Males are generally larger than females. They have a dark grey colouration with a darker tip on the tail which is long and bushy. Their legs are also darker than the rest of the body which has the typical elongated mongoose body-shape. Their ears are small and rounded and situated on the sides of their head.
Distribution: Found in South Africa and the west, northwards to southern Angola.  They are poor diggers so they take refuge in ground holes constructed by other species such as hares or in between rock piles and dense vegetation. They often live in close association with humans in urban areas.
Diet: Mongoose are diurnal which means they are active during the day where they spend most of their time hunting. They are opportunistic hunters and their diet consists of a wide range of species which include insects, small rodents, birds, small reptiles, amphibians, other invertebrates and fruit.
Behaviour: Mongoose are mostly solitary. However they are also occasionally sighted in pairs during mating time (July to August), or in groups of adults with their young. Mongoose give birth to litters with one to three young which are blind and hairless or fully furred (depending on species) when born. Once the young are capable of being completely independent, they leave the litter.
Interesting Fact: Until a few decades ago, the Cape Grey Mongoose was thought to be endemic to the Cape Province, but it is now known to occur in much of the rest of South Africa and in the west, northwards to southern Angola. As for the Egyptian Mongoose, in Egyptian mythology, Ra (sun god) would turn into a giant ichneumon (over 24 metres) to fight the evil god-snake Apopis.