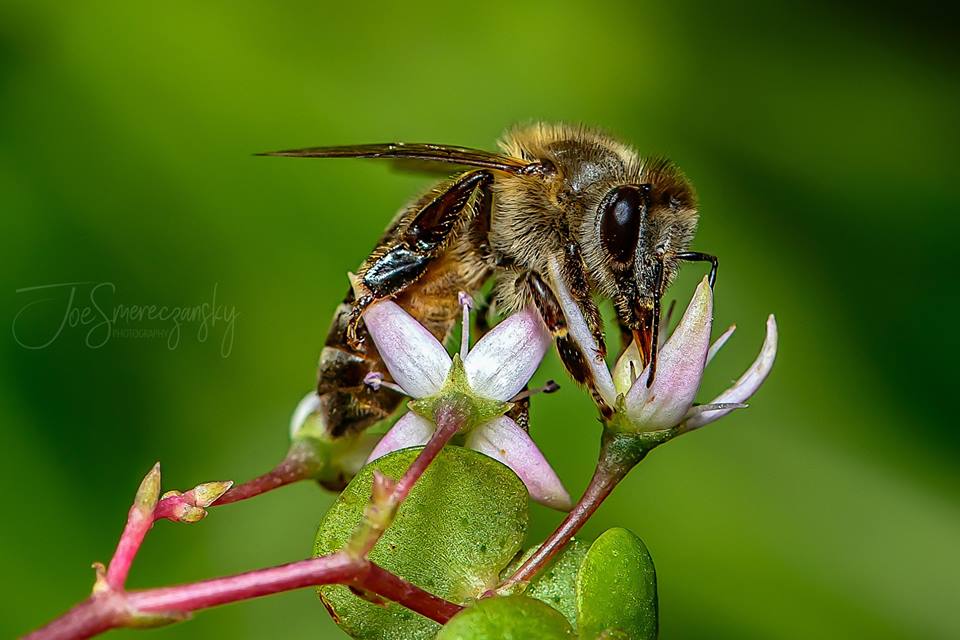 Common Name: Cape Honey Bee
Family: Apidae
Description: Characteristically darker in colour than other honeybees.
Distribution: This bee only be found in the Western Cape and some parts of the Eastern Cape amongst the Fynbos
Life Cycle: The life cycle follows the pattern: egg-larva-pupa-adult.
Diet: It feeds on the nectar and pollen of many different flowering fynbos plants.
Behaviour: Colonies have but one mated Queen with 10 000 to 50 000 worker bees that are all female. The queen bee can however choose the sex of her offspring and unfertilized eggs develop into male “drones” which are only used for mating and will die after the “deed” is done. Queens have an average lifespan of four years whereas workers only survive for a few weeks during summer.
Conservation Status: Least Concern
Interesting Fact: The Cape Honeybee is extremely important within the ecosystem as they play an important role of providing pollination services to all plants. 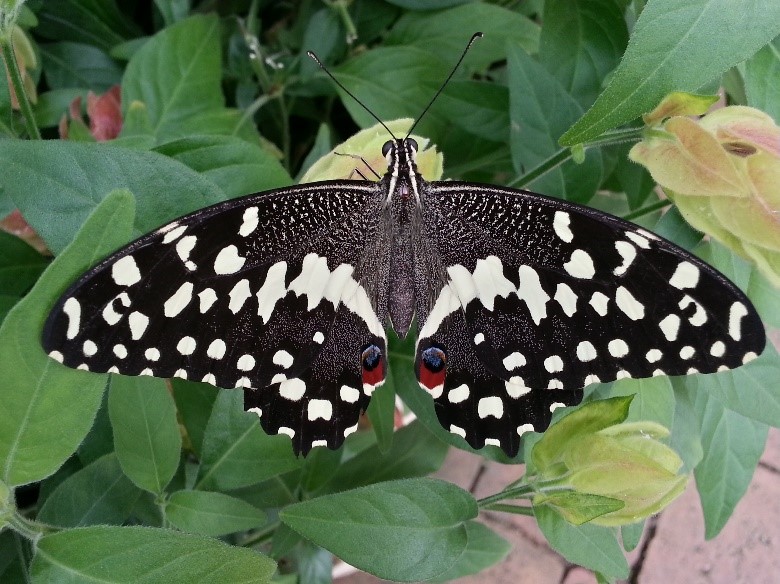 Common Name: Citrus Swallowtail
Family: Papilionidae
Description: These butterflies have black and yellow markings with red and blue eyespots and female butterflies tend to be larger than males.
Distribution: They are common to sub-Saharan Africa.
Diet: These butterflies feed on the nectar of flowers, they will hover briefly at each flower, their wings in constant motion, before moving off and resuming their flight in search of the next flower.
Behaviour: Generally these butterflies pass through a three generation life cycle per year. Females lay their eggs one by one on the leaves of Citrus Trees. After about six days the egg hatch into immature larva.  The larvae also has a black and white colouration which provides effective camouflage as they resemble bird droppings, they can also grow to a length of 10 – 15 mm before becoming mature larvae which grow to 45mm. After the larvae mature they then produce a cocoon and attach the silk pod to branches of trees or bushes. They then remain in pupal form for 2 – 3 weeks before emerging as adults. Courtship and mating is fairly simple, once the female enters the visual field of the male, he quickly moves and forces the female to land. The male then produces pheromones to attract the female and she responds by emitting a perfume and once she responds, mating can then take place.
Interesting Fact: When in the mature larvae form the caterpillars are green with white or pink markings. When threatened by a predator (mainly birds) they emit a forked orange-coloured organ that gives off a strong smell, discouraging the predator. This larvae is also susceptible to acting as hosts for parasitic wasp larvae. 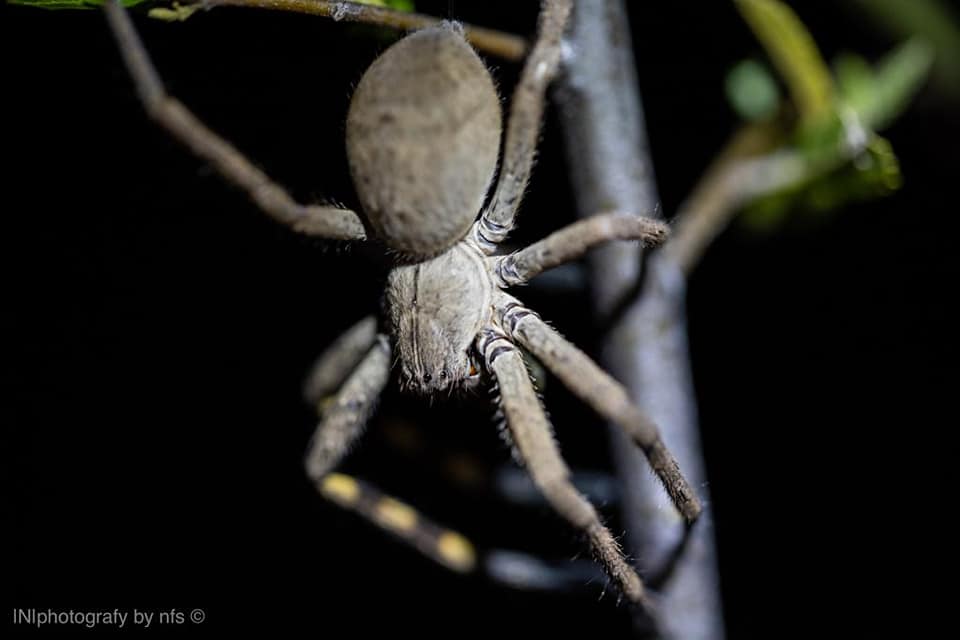 Common Name: Common Rain Spider
Family: Huntsman Spider
Description: This spider, with a body size of 2-3 cm in length, has eight eyes and is coloured with inconspicuous shades of brown on the top half of its body. Its bottom side is a combination of yellow and black banding which extends down its legs.
Distribution: Its preferred habitat is scrubland and savannah woodland throughout Southern Africa living under rocks or bark on trees but will often enter homes before and after rain when it is most active.
Diet: Their diet consists of many species of insects, some invertebrates and occasionally small skinks and lizards.
Behaviour: After mating in early summer, females will construct a round egg sac about 6 – 10 cm in diameter, made of silk with leaves and twigs woven in between to protect the eggs within and are suspended from branches in bushes or trees. The females spends  3 – 5 hours constructing the sac and then will aggressively guard the sac until the spiderlings molt for the first time and start chewing their way through the sac, after which the female will abandon the sac and young. Females can construct about three egg sacs over their two year life span.
Interesting Fact: These spiders have been known to inflict a painful bite but are not at all toxic to humans. The rain spider often falls into the common misconceived group of spiders that are believed to be deadly to humans. 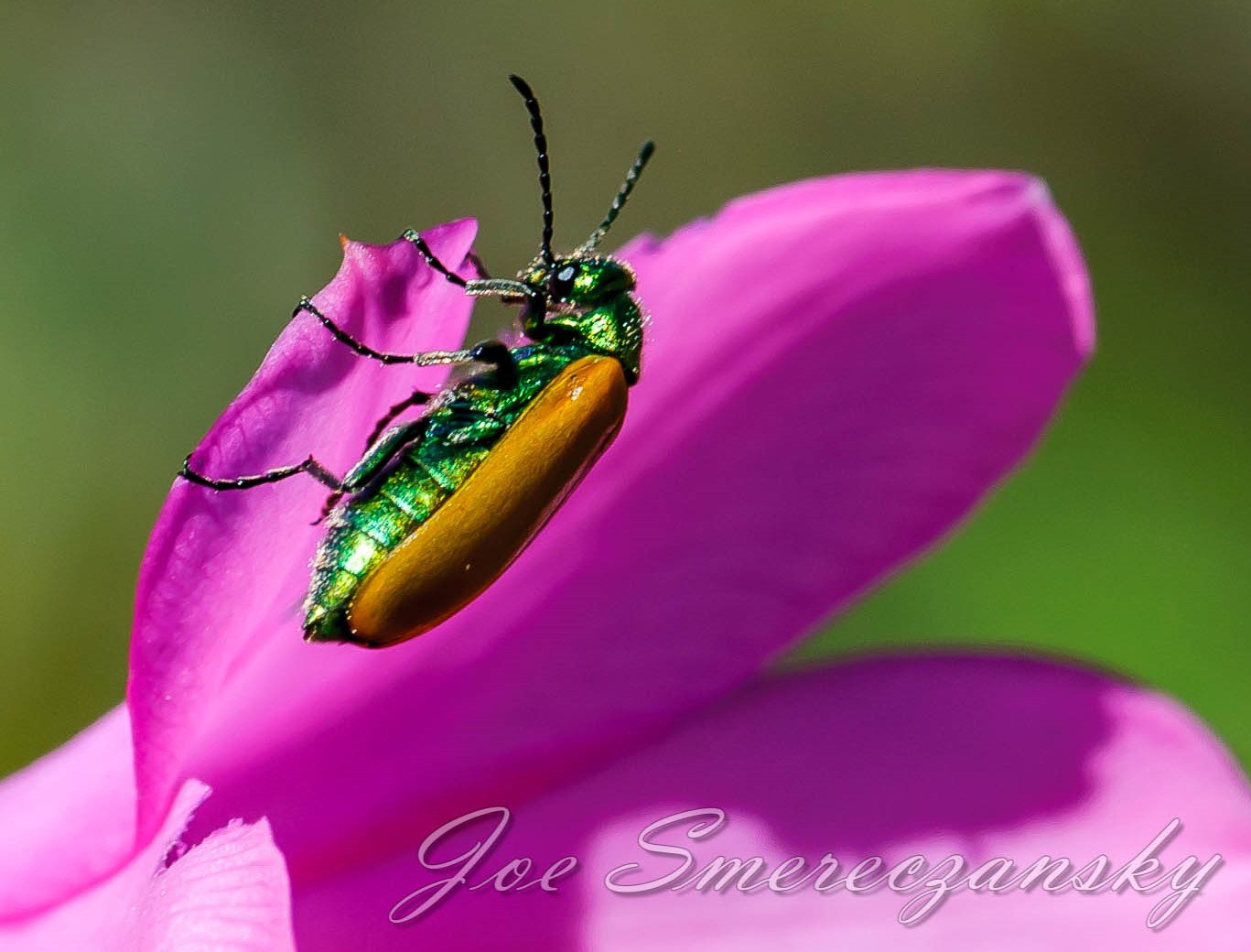 Common Name: Blister Beetle
Family: Meloidae
Description: Size 1-2.5 cm in length. Soft body, yellow and black patterns (warning signs) and red.
Distribution: Common and widespread in South Africa and parts of Zimbabwe.
Diet: They feed on flowers but can compensate as parasites of many other crops damaging insects such as Grasshoppers and Swarm locusts.
Behaviour:  Smallest species are attracted to light at night and many come in contact with humans. 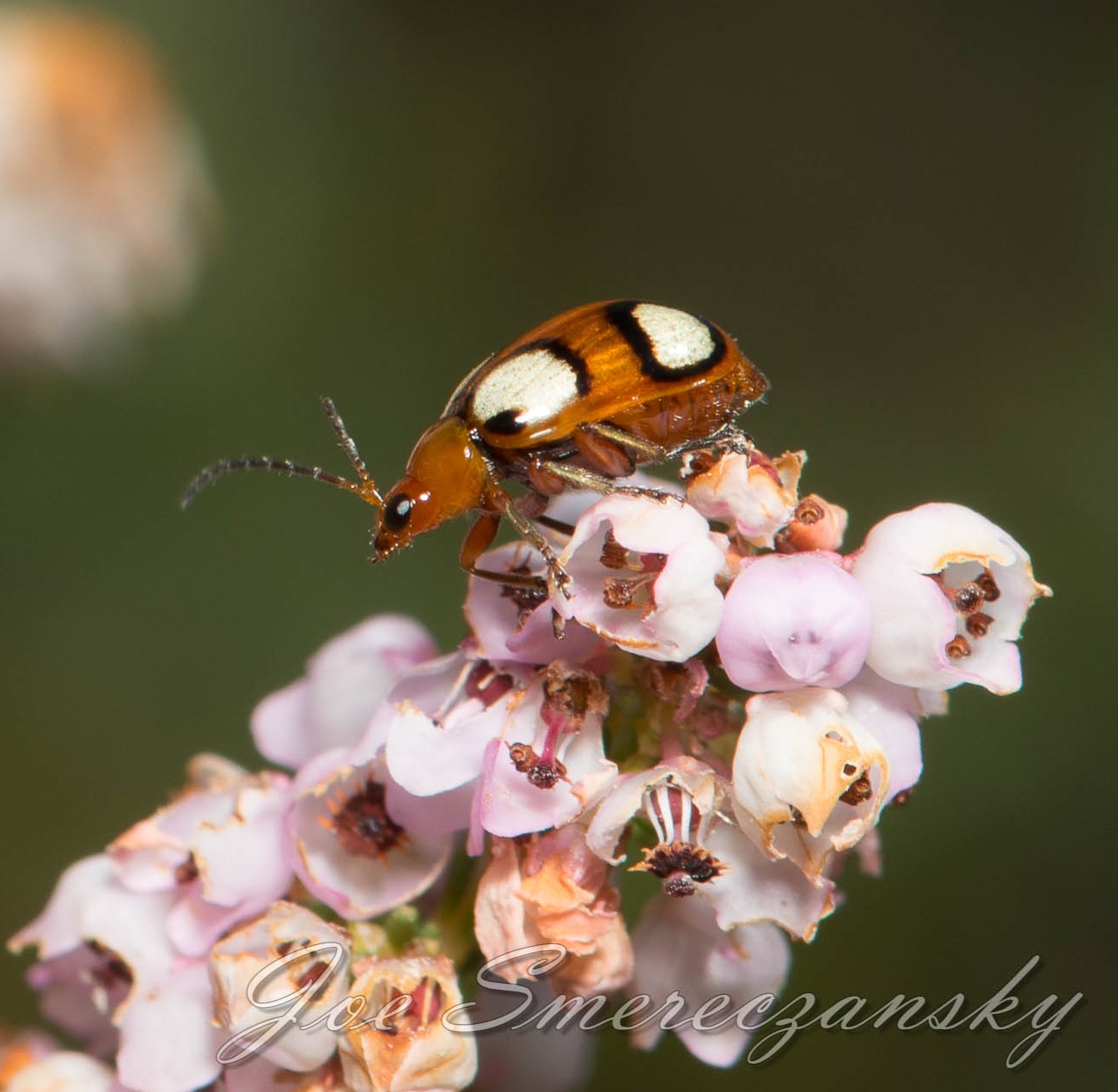 Common Name: Small-eyed leaf beetle
Family: Chrysomelidae
Description: 5mm long, 4 yellow spots on its Elytra with an orange head.
Distribution: They are distributed throughout South Africa and easily recognised by the four yellow spots on the Elytra. These can be found on all types of flowers and are also capable of jumping.
Diet: Larvae feed on foliage,  roots or underground stems of roots.
Behaviour: Jumping, flying from plant to plant. Larvae in the leaf of the plant. Eggs are laid on the leaves after the mating.                          Conservation status:  Not evaluated 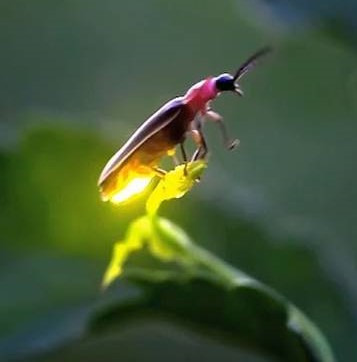 Common Name: Fire Flies
Family: Lampyridae
Description: 5mm long, 4 yellow spots on its Elytra with an orange head.
Distribution: Fireflies are 5 to 25 mm long. The head is hidden beneath a flattened pronotum, which is part of the thorax. The soft elytra are normally brown or black, frequently with yellow or orange markings. There is a second pair of wings beneath the elytra. The females of many species are wingless or have very short wings. The final two or three segments at the tip of the abdomen are generally luminous. They are a lighter shade. Depending on the species, both males and females or just one of the two sexes emits light. Females are usually slightly larger than males. Above 2 months (life span) and up to 1 inch (Relative to a paper clip).
Diet: Omnivores, larvae feeds on worms and slugs. Adult’s nectar pollen.
Interesting Fact: Also called lighting bugs, fire fly enzymes have been used by scientist to reveal food-borne bacteria.                            Conservation status:  Fireflies are in danger of extinction as a result of human activities such as habitat loss, pesticides and light pollution.  Photo credit:  Joe Smereczansky 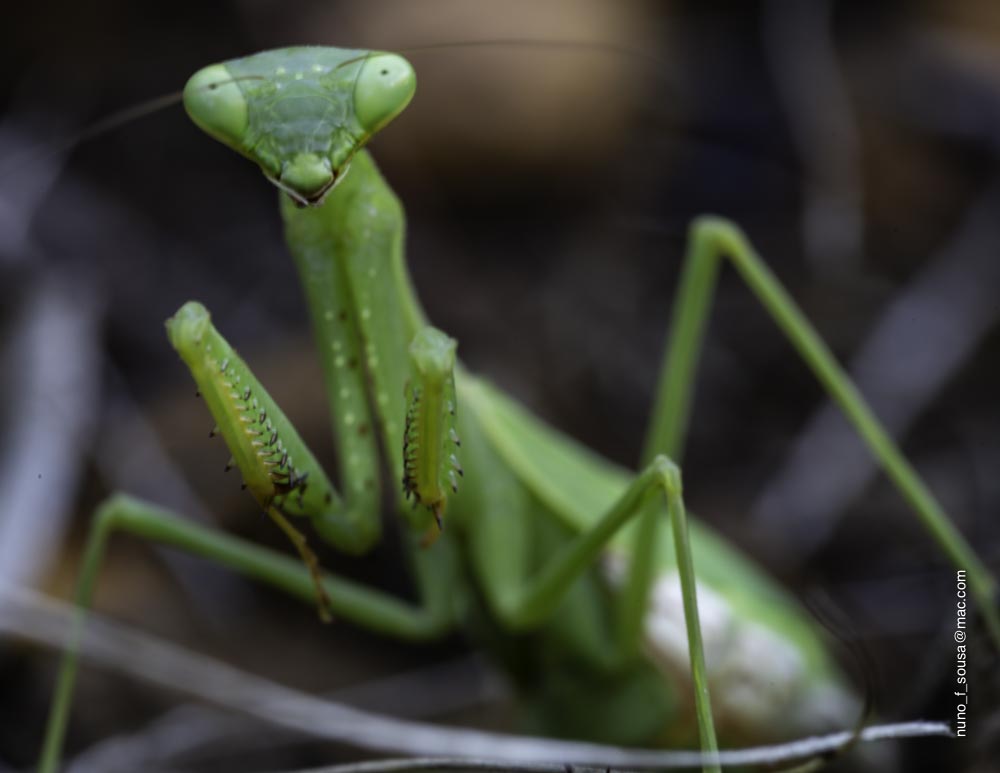 Common Name: Praying Mantis (Africa)
Family: Matidae
Description: It has white spots or stripes, has a mobile triangular head which can turn 180° and a range of 2-15m.                                      Distribution: Most occur in South Africa.
Diet: The praying mantis is seen as a beneficial bug as it feeds mainly on other critters that are often considered pests. Insects such as flies, crickets, moths and even cockroaches all form part of a well-balanced diet.
Interesting Fact: They are ambush predators, females and males can be distinguished based on the number of abdominal segments (female 6, male 8). For anniversaries, the male mantis would eventually become the meal. Female praying mantises literally bite their male counterparts’ heads off once they’ve mated. Mantises are masters of camouflage as well. Some actually look like the leaves that they perch on, with some closely resembling dead leaves. They rock back and forth slightly, blending in with the leaves that are being blown by a breeze. 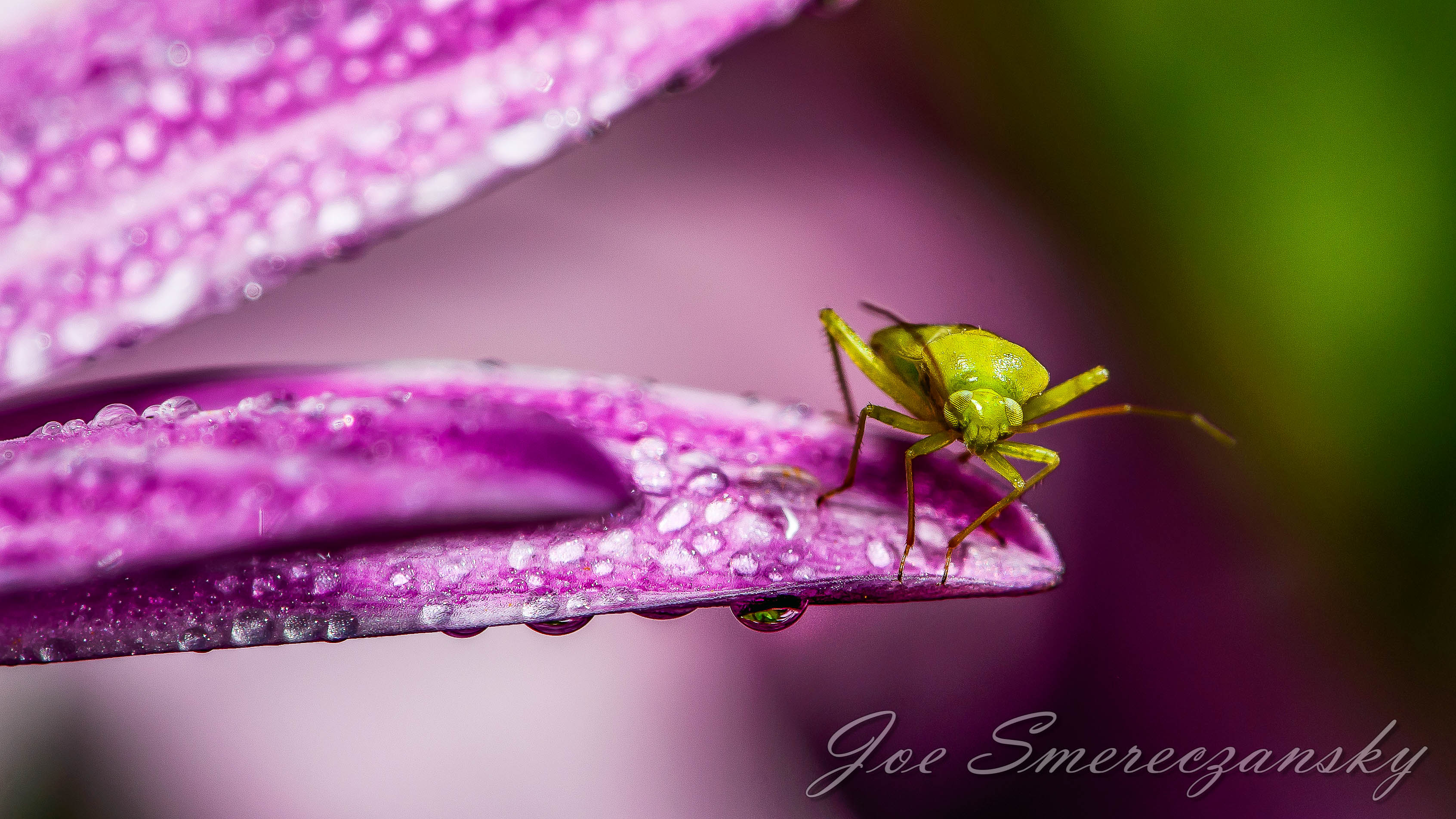 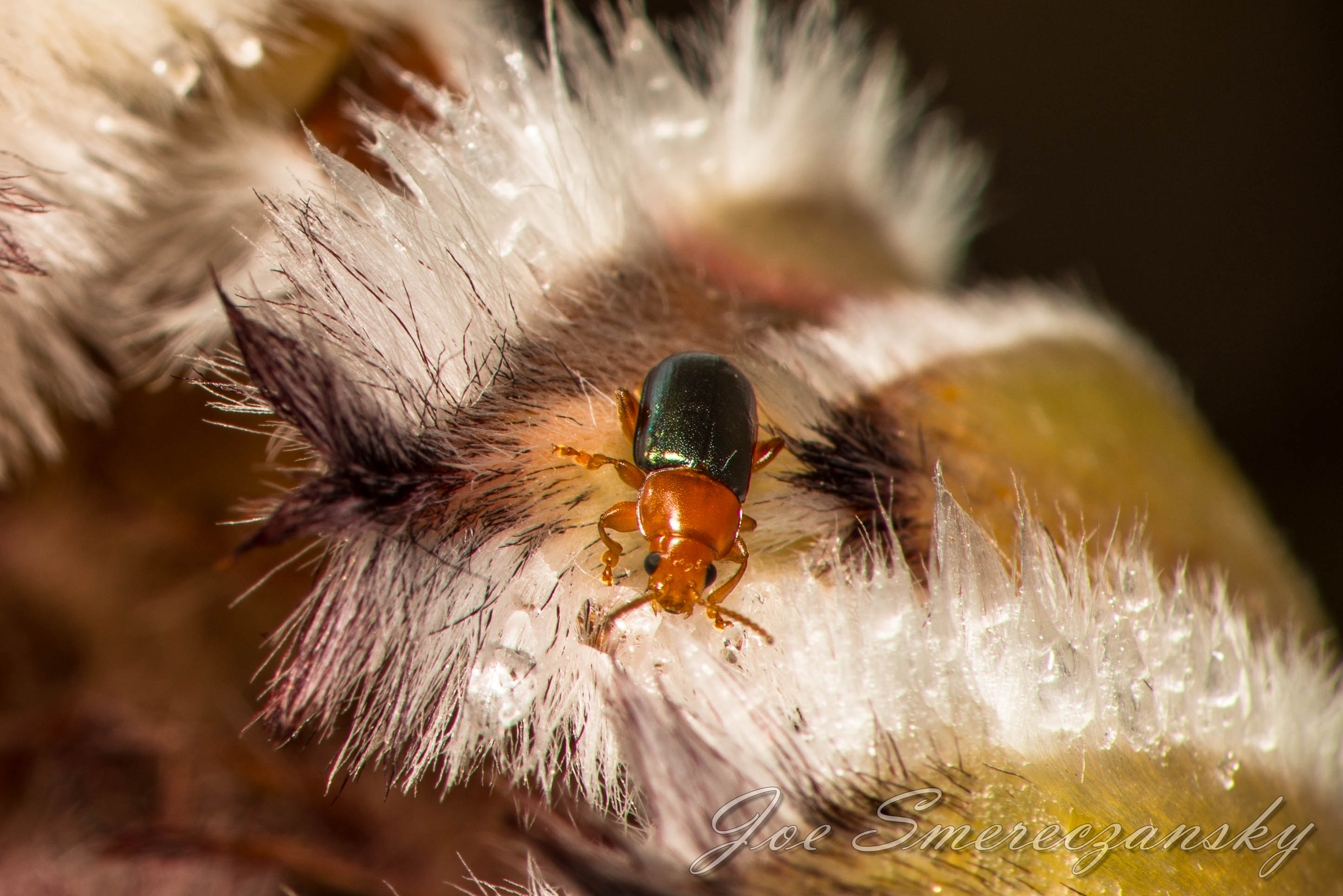