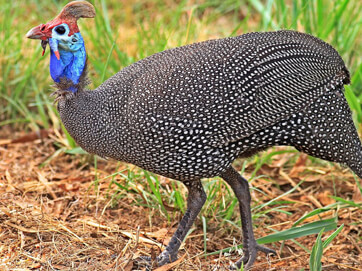 Common Name: Helmeted Guineafowl
Family: Numididae
Description: Relatively large in size (53–58 cm) with dark grey bodies and white speckled feathers and a helmet-like head, which is blue and red in colour.
Behaviour: Social birds, which flock and roost in trees at night to avoid predators. During breeding season (October – April), males will spend the majority of their time defending and feeding the females while incubating the eggs. Incubation lasts between 25 to 29 days. Juveniles are precocial and called “keets”. Life span on average is about 12 years.
Diet: Seeds and insects, most importantly ticks
Distribution: Widely distributed throughout southern Africa preferring grasslands, thorn veld and agricultural land or open areas. Often seen in the Reserve, especially in the picnic areas.
Conservation Status: Least Concern.
Interesting fact: Social interaction with other species in the wild is rare. Guinea-fowl do fall prey to birds-of-prey such as eagles and owls. 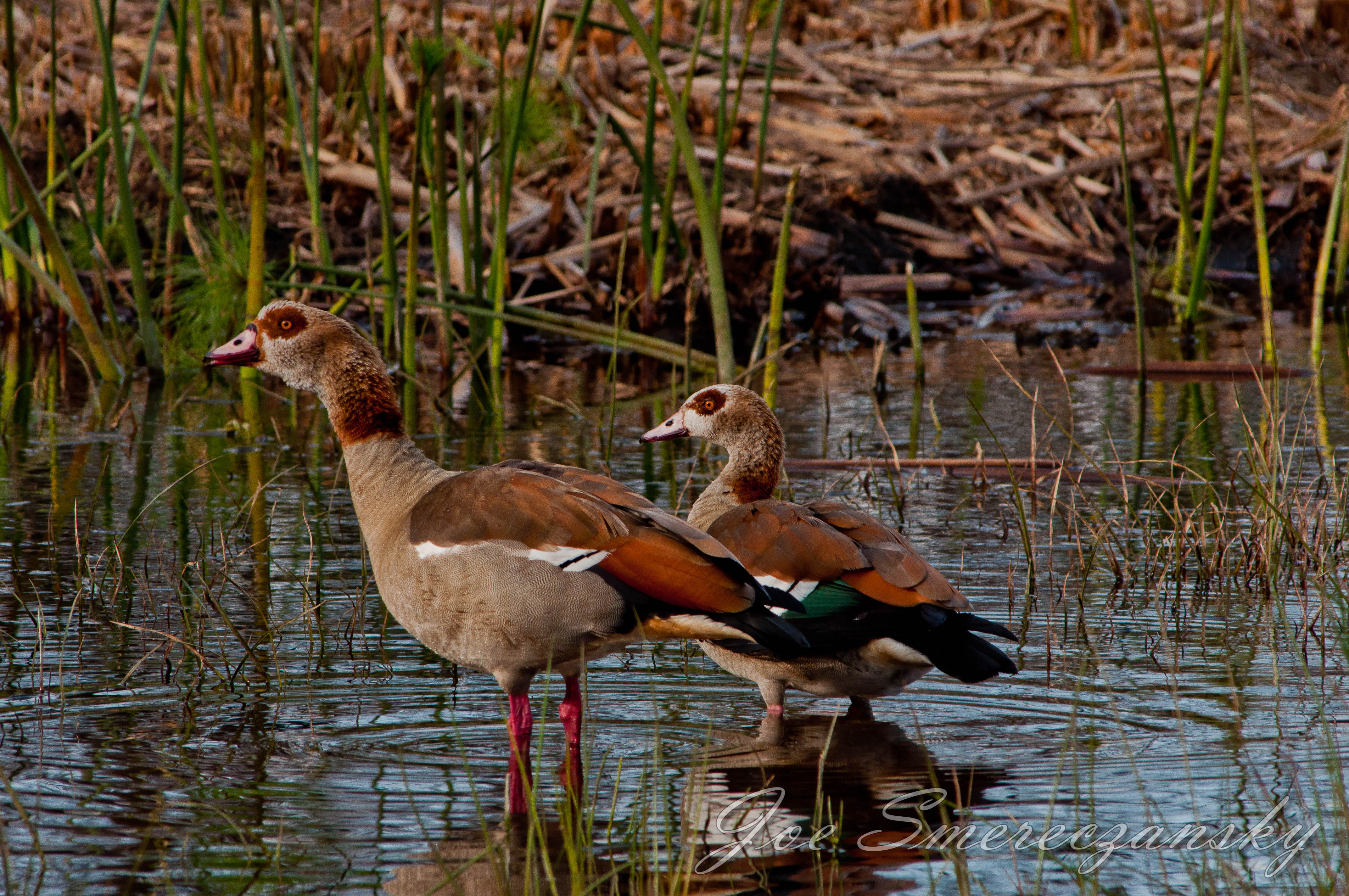 Common Name: Egyptian Goose
Family: Anatidae
Description: The Egyptian goose measures 63-73cm in length and has a wingspan of about 134-154cm. The average weight for one of these geese is 1.1-1.4kg. They are a pale buff colour on their chest; the back has brown, dark orange, black and white feathers. The beak is pink on the top and the underside is black. Around the eyes is a chocolate colour patch. The male has a distinctive brown spot in its chest.
Diet: Feed on a range of vegetation. These include grasses, stems, berries and seeds as well as a range of other plants. Algae and aquatic plants also form a portion of their diet. At times they have also been known to feed on insects and some small animals.
Distribution: Spread throughout the majority of Africa. Prefer an open, wetland area but live in every habitat with good food and water supply. A common site in the Reserve.
Behaviour: Generally live to about 15 years. The breeding season varies between spring and summer. The clutch of eggs is generally 5-12 eggs. Non-migratory.
Conservation Status: Least Concern
Interesting Fact: The Egyptians believe these geese were sacred therefore regularly featured in their artworks. 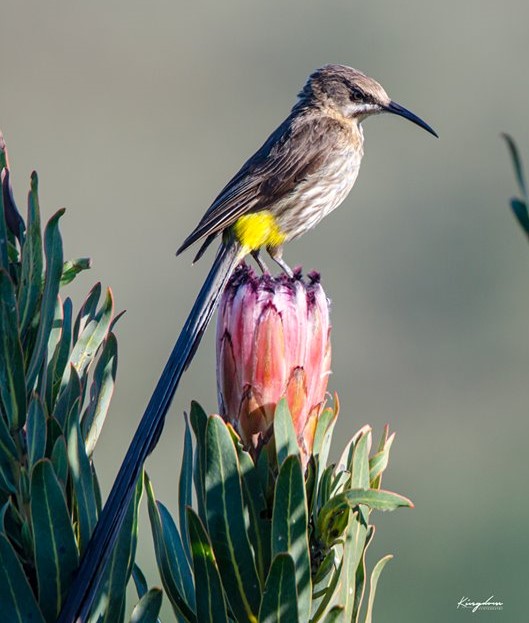 Common Name: Cape Sugarbird
Family: Promeropidae
Description: This is a grey-brown bird with a spot of yellow under its tail and very long tail feathers present in males. The male is 34 – 44 cm long, while the shorter-tailed, shorter-billed and paler breasted female is 25 – 29 cm long. The Cape Sugarbird is also characterized by the sound its wings make in flight.
Distribution: Endemic to the fynbos biome of the Western Cape.
Diet: Besides eating insects and spiders, the Sugarbirds mainly eat the nectar found in the Protea flowers. Its long, sharp beak is used to reach the nectar with the brush-tipped tongue
Behaviour: The breeding season for this bird is during winter when there is ample food available. The Cape sugarbird only uses the Protea bushes for nesting sites. They can be spotted in pairs (males and females) sitting on top of the Protea bushes, the males mainly protecting its territory.
Conservation Status: Least Concern.
Interesting Fact: The feathers of the wings are arranged in such a way that they make an “frrrt-frrrt” sound, and this sound is used to attract females. 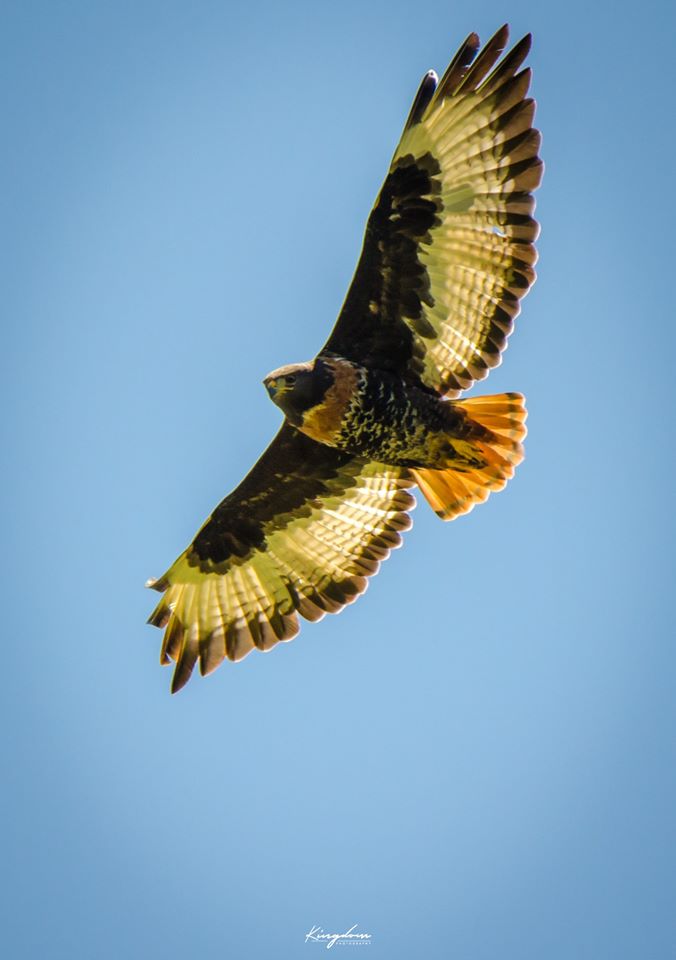 Common Name: Jackal Buzzard
Family: Accipitridae
Description: Adults measure 44 – 60 cm in length and weigh between 790 – 1400 g with a wingspan of about 127 – 143 cm.  This buzzard has black plumage with a rufus tail and chestnut below the chin and throat.
Distribution: Endemic to Southern Africa, it lives among mountains and in adjacent savanna and grassland.  In the Reserve, these birds are seen overhead or sitting on larger trees from time to time.
Diet: Small ground mammals, snakes, lizards, birds, insects and carrion.                                                                                          Behaviour:  Pairs have aerial displays during the breeding season which peaks from July to December.  A large stick nest is built or on a rocky crag.  Two creamy or blush white eggs are laid and are incubated by the female while the male brings food to the nest.  The eggs hatch after 40 days.
Conservation Status: Least Concern.
Interesting Fact: Although these raptors are common and adaptable they are endangered by large man-made objects such as wind turbines, power-lines and steep-sided, massive reservoirs, in addition to poisoning of carcasses (targeted jackals). 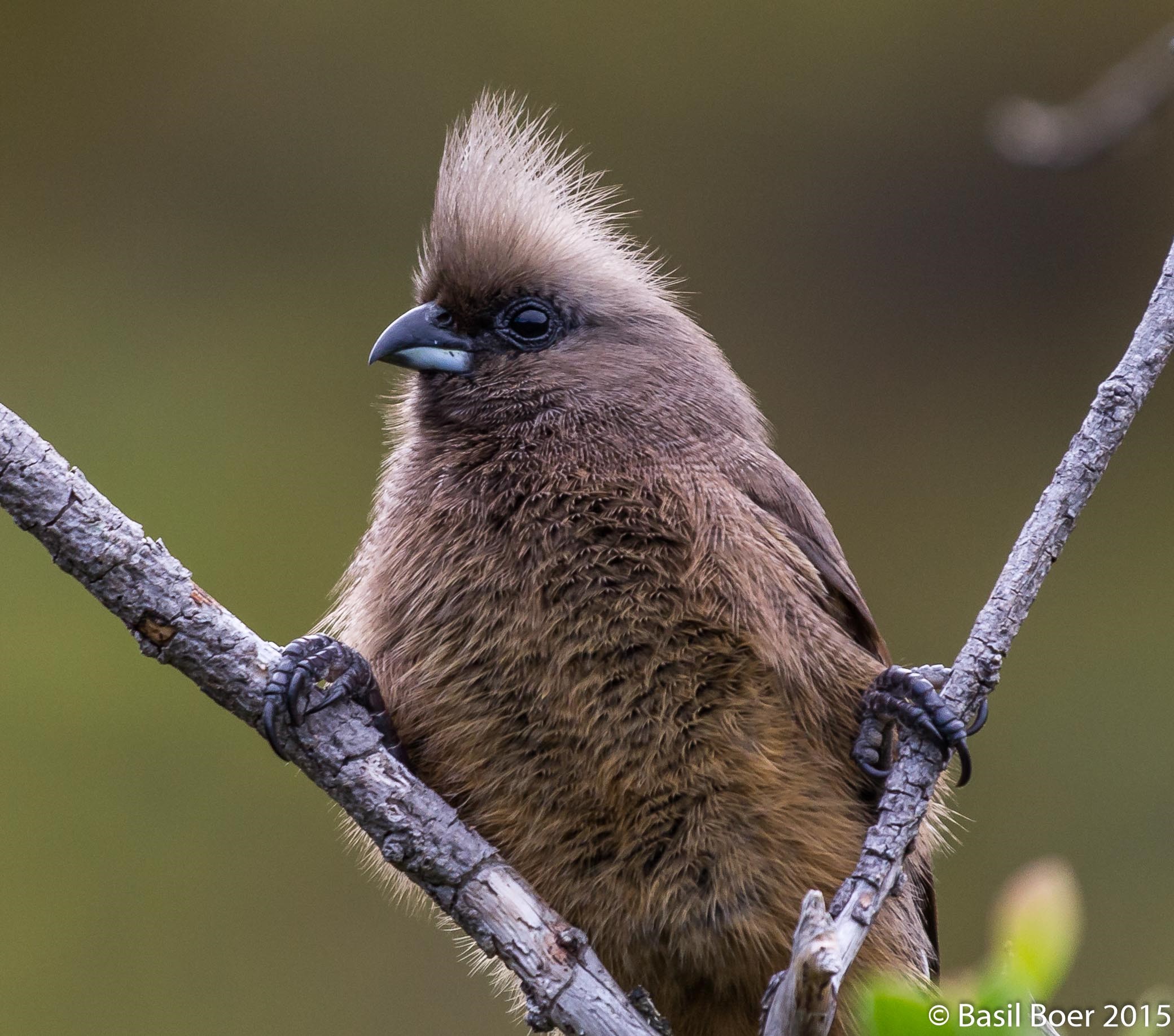 Common Name: Speckled Mousebird
Family: Coliidae
Description: About 35cm and weighing about 57g. It has a dull brown colour on the back and head, with a black and pinkish bill. These birds are not songbirds but do tend to be noisy, making a warbling “tsu-tsu” or “tisk-tisk” call while in flight.
Distribution: Most habitats are suitable but it prefers open vegetation. It is widespread in savanna and open woodlands and thickets.  It is common in the Nature Reserve and seen in small groups.
Diet: Fruits, berries, leaves, seeds and nectar.                              Behaviour:  Social birds which feed together and engage in mutual preening. These birds roost in very tight groups of about 20. Breeding throughout the year, clutches range from one to seven eggs at a time, incubation lasting 14 days.
Conservation Status: Least Concern.
Interesting Fact: When roosting the mousebird goes into a torpid state which could make them easy prey, but the large roosting groups are effective enough to deter most nocturnal predators. 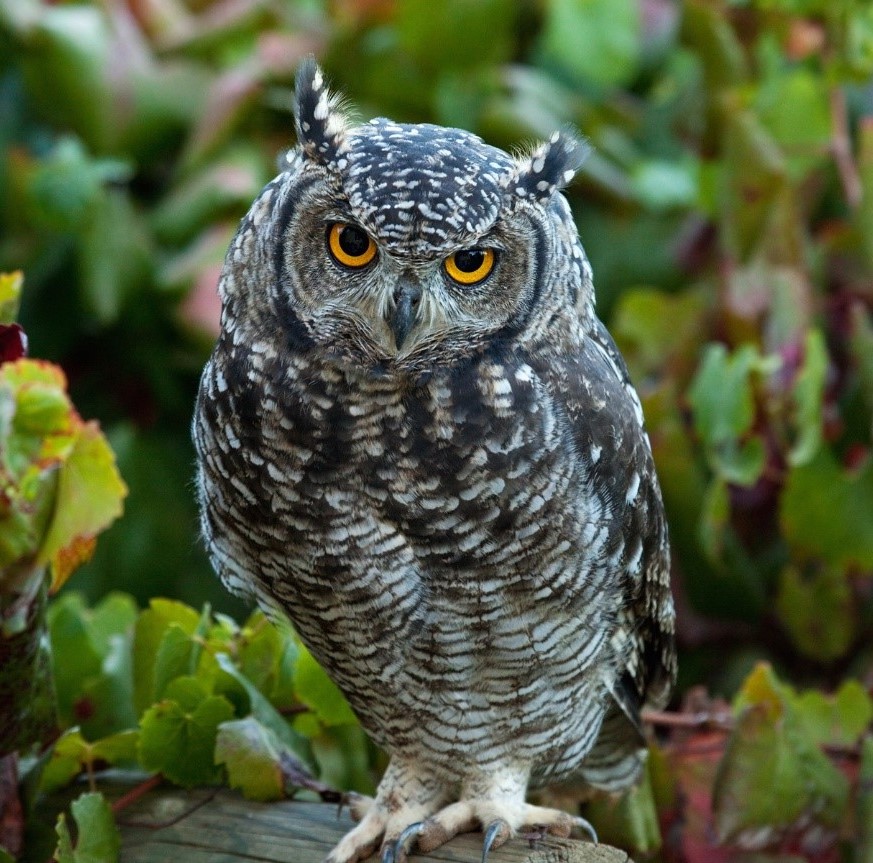 Common Name: Spotted Eagle Owl
Family: Accipitridae
Description: They are medium sized owls and one of the smallest of the eagle owls. It grows to 45 cm in length, weighs 480 to 850 grams and has a wing span of about 100 to 140 cm. The body has different colours and patterns, the lower body is an off-white colour with brown bars. The upper body is dusky brown with whitish or pale buff spots and the head has a pale ochre facial disk with fine dark barring and a blackish rim with prominent ear tufts and yellow eyes. The flight and tail feathers are also barred with light and dark colours. Females have a larger wingspan than males and are also more vibrant in colour.
Distribution: These owls can be found throughout Sub-Saharan Africa as far south as the Cape. They are resident in a variety of habitats – in semi-open woodland with shrubs and bushes and sparse ground cover; in savannah with thorny shrubs; in areas with scattered trees and bushes; on rocky hillside.
Diet: The prey consists of small mammals, birds, insects, frogs and reptiles. Owls generally swallow their prey whole but if some prey is too large, the owl will tear it apart by holding it down with its talons and tearing the flesh with its sharp beak.                                    Behaviour: Adult pairs are very aggressive when it comes to defending their territory.The calls are generally typical of eagle owl hoots, males call with two hoots: “Hooo hoooooo” and the female answers with three: “Hooo hoo hooo”.
Interesting Fact: The design of owls’ wings allows them to fly in almost absolute silence. Different parts of their wings and the characteristics of their feathers contribute to their silent flight. Owls have broad wings with large surface areas that help them to float through the air without flapping too much. Less flapping makes less noise.

Common Name: Malachite Sunbird
Family: Nectariniidae
Description: The breeding male has a very long tail about 25 cm and the shorter-tailed female about 15 cm. The adult male is metallic green when breeding, with blackish-green wings with small yellow pectoral patches. In non-breeding plumage, the male’s upper parts are brown apart from the green wings and tail. The under parts in eclipse plumage are yellow, flecked with green. The female has brown upper parts and dull yellow underparts with some indistinct streaking on the breast and has a square tail.
Distribution: These birds are found from the highlands of Ethiopia southwards to South Africa in hilly fynbos (including protea stands as well as areas with aloes) and cool montane and coastal scrub, up to 2,800m altitude in South Africa.
Diet: They feed mainly on nectar but will also take insects to feed their young.
Behaviour: They are aggressive when nesting but gregarious out of breeding season. They usually form flocks of over 1,000 birds.  Their nests are oval and suspended like most sunbirds, or they are constructed inside a bush. The female incubates one to three dark-blotched, greenish eggs for two weeks. The chicks are fed by both parents until fledging time, and the chicks will for a time return to the nest to roost.
Interesting Fact: The sunbird thrives in hilly-fynbos such as protea plants and aloes. Majority of sunbird species take nectar by hovering like a hummingbird. The malachite sunbird has a long, thin down-curved bill with a brush-tipped tongue specially adapted for nectar feeding.