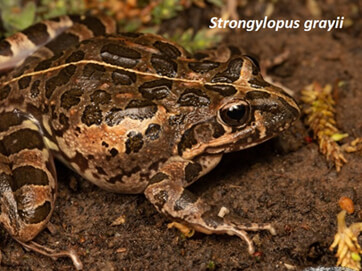 Common Name: Clicking Stream frog
Family: Pyxicephalidae
Description: The clicking stream frog grows to a maximum size of about 5 cm. The body is a light to dark brown with scattered dark markings with a distinctive white line running from the snout to below the legs.
Distribution: Found between the fynbos in seep lines and close to water from about zero to 1600m above sea level. These frogs are common around the Duck Pond and can be heard calling more during winter.
Diet: Main source is different insects.
Behaviour: These frogs breed during winter and close to dams, pools, ponds and shallow seeps. Females deposit single or clutches of eggs (200 – 300) about 30m from the water under vegetation, in crevices or under rocks. Tadpoles emerge after five days and make their way to the water, further development taking place over a period of 3 – 6 months.
Life Cycle: Follows the pattern of, egg-tadpole-froglet-adult
Conservation Status: Least concern
Interesting Fact: Frogs do not have ear holes, instead they have an external hearing structure called a tympanum which is located behind each eyes. The tympanum is an oval shaped membrane which transmits sound to the inner ear. 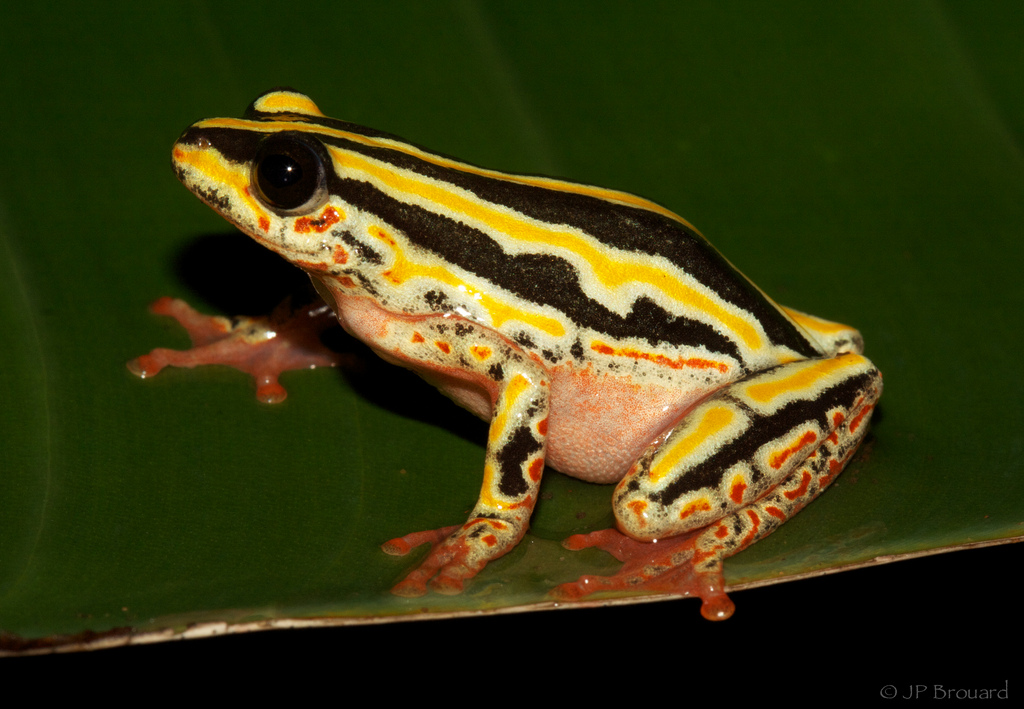 Common Name: Painted Reed Frog
Family: Hyperolidae
Description: Medium sized frog which grows to 43mm in length, its toes end with toe pads and it also has a wide variety of brightly coloured markings with profusion of stripes, spots or stippling.
Distribution: Widespread from Mozambique, Malawi, Zimbabwe, Eswatini, eastern and southern Africa.
Diet: Variety of insects.
Behaviour: It makes use of tall reed beds to breed, which males climb up and emanate their shrill calls and each call site is defended from other males. They use flash colouration as an anti-predatory device.  Flash colouration is a type of protective colouration in which the animal is cryptic when at rest but reveals brilliantly coloured parts while escaping.
Conservation Status: Least concern (category 3 invasive in the Western Cape)
Interesting Fact: Able to bleach their colouration during the day to thermoregulate.  Unfortunately this frog is considered to be an invasive frog in the Western Cape due to the fact that it is found outside of its historic range and that it has the ability to breed quickly and to displace local species.